We Cry Justice: Reading the Bible with the Poor People’s Campaign

Organized into fifty-two chapters, each focusing on a key Scripture passage, We Cry Justice offers comfort and challenge from the many stories of the poor taking action together. Read anew the story of the exodus that frees people from debt and slavery, the prophets who denounce the rich and ruling classes, the stories of Jesus’s healing and parables about fair wages, and the early church’s sharing of goods. Reflection questions and a short prayer at the end of each chapter offer the opportunity to use the book devotionally through a year.

Always with Us?: What Jesus Really Said about the Poor

A strong theological call for ending the abomination of systemic poverty.

Theoharis reinterprets “the poor you will always have with you” to show that it is actually one of the strongest biblical mandates to end poverty. She documents stories of poor people themselves organizing to improve their lot and illuminates the implications for the church. Poverty is not inevitable, Theoharis argues. It is a systemic sin, and all Christians have a responsibility to partner with the poor to end poverty once and for all. Christianity will fail if we don’t stop Christian nationalism

We must resist Christian nationalists’ heretical form of religion, which parallels the “morality” of the Roman Empire that Jesus challenged. 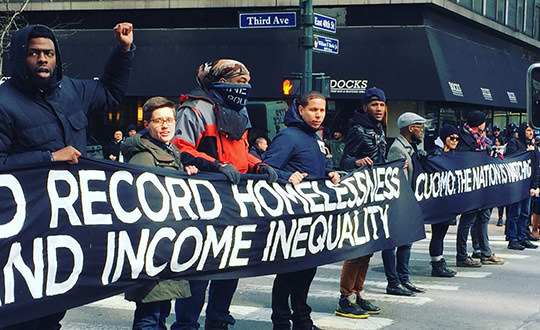 Ending poverty will take a new look at wealth, too

Gov. Kathy Hochul declared a state of emergency last week as a winter storm of historic proportions bore down on western New York, warning families: “We want all New Yorkers to get where they need to go safely to celebrate the holidays with loved ones.” As we continue to deal with the aftermath of that deadly  storm, we would do well to remember the millions of families in New York that were already experiencing the storms of poverty, inequality and policy violence, not to mention those who have nowhere safe to celebrate the holidays. Everybody In, Nobody Out: Dreams of Democracy This Christmas

Last week, I was in Washington, D.C.’s Union Station. The weather had turned cold and I couldn’t help noticing what an inhospitable place it had become for the city’s homeless and dispossessed. Once upon a time, anyone was allowed to be in the train station at any hour. Now, there were signs everywhere announcing that you needed a ticket to be there. Other warning signs indicated that you could only sit for 30 minutes at a time at the food-court tables, while barriers had been placed where benches used to be to make it that much harder to congregate, no less sit down. This Midterms, the Bible Reminds Us Poor People Have All the Power

“Come on, come on, come on! Don’t you want to vote? … Yes, I’m gonna vote … for justice!” was the song that closed out a Zoom rally with hundreds of poor and low-income people, moral leaders, clergy, activists, and advocates who are part of the Poor People’s Campaign: A National Call for Moral Revival. Yara Allen, co-director of theomusicology and movement arts for the Poor People’s Campaign, led the song as participants registered to text bank five million poor and low-propensity voters before the midterms in order to enliven and enlarge the electorate of low-income voters. “We envision a world without poverty, without racism, without the destruction of the earth. This kind of common good is big, but it is completely possible,” Rev. Dr. Liz Theoharis urged. “We have no real scarcity. We just have a scarcity of political will and moral consciousness to do the right thing.”

Rev. Dr. Liz Theoharis is a Union alumna and serves as Director of the Kairos Center for Religion, Rights, and Social Justice at Union Theological Seminary, and Co-Chair of the Poor People’s Campaign: A National Call for Moral Revival. The Quality (or Inequality) of Life

Ours is an ever more unequal world, even if that subject is ever less attended to in this country. In his final book, Where Do We Go From Here?, Reverend Martin Luther King wrote tellingly, “The prescription for the cure rests with the accurate diagnosis of the disease. A people who began a national life inspired by a vision of a society of brotherhood can redeem itself. But redemption can come only through a humble acknowledgment of guilt and an honest knowledge of self.” The Reverend Dr. Liz Theoharis is Co-Chair of the Poor People’s Campaign: A National Call for Moral Revival with the Rev. Dr. William J. Barber II. She is the Director of the Kairos Center for Religions, Rights, and Social Justice at Union Theological Seminary. Liz is the editor of We Cry Justice: Reading the Bible with the Poor People’s Campaign (Broadleaf Press, 2021). She is the author of Always with Us?: What Jesus Really Said about the Poor (Eerdmans, 2017) and co-author of Revive Us Again: Vision and Action in Moral Organizing (Beacon, 2018). She is an ordained minister in the Presbyterian Church (USA).