As the world reels from the omicron surge, it is time we reckon with a dramatic and immoral failure of the world’s power holders to meet the challenges of this historic pandemic. A new report out today from Oxfam finds that inequality has not only worsened over the last two years, it has become deadly. As Congress debates voting rights and investing in the people, it’s important to understand the dark forces that underlie the increasingly reactionary and authoritarian politics on the rise in this country.

“If you are neutral in situations of injustice, you have chosen the side of the oppressor. If an elephant has its foot on the tail of a mouse and you say that you are neutral, the mouse will not appreciate your neutrality.” — Archbishop Desmond Tutu After months of negotiations, Sen. Joe Manchin (D-W.Va.) decided to kill the Build Back Better agenda. He made the announcement on Fox News Sunday, just days before an already-fraught holiday as we’re seeing COVID surges, essential workers still being paid wages of those considered expendable, and storms and extreme weather wreaking havoc on lives and livelihoods. When voicing his dissent for the Build Back Better agenda, despite making promises that he was negotiating in good faith since the summer, Manchin had the nerve to say: “I tried everything humanly possible.” Senator Manchin professes to be a follower of Catholic teachings and yet we are seeing a Senator who has the power to make people’s lives in his state and all across this country better, invest in living wages, invest in a child tax credit, pass voting rights protections and expansion. When you have power and refuse to use it for good, that is sin of the highest nature. This is exactly what the prophets throughout history speak against.

Some senators say Biden’s social and climate bill costs too much, but comparing it to the military spending plan they just passed suggests otherwise.

This week, the families of 61 million children received their final payments under the expanded Child Tax Credit. This credit has kept 10 million children above the poverty line, but it is expiring as the Senate delays a vote to renew it through the Build Back Better Act. Lifting from the Bottom So Everyone Can Rise

When President Biden first unveiled the Build Back Better agenda, it appeared that this country was on the path to a new war on poverty. In April, he told Congress that “trickle-down economics have never worked” and that it was time to build the economy “from the bottom-up.” 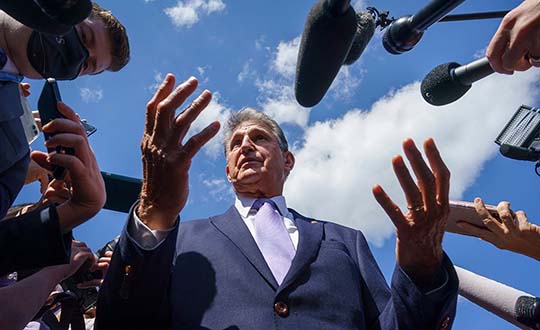 Despite a stately facade of moderation, Manchin has, in the words of the gospel, ‘neglected the more important matters of the law — justice, mercy and faithfulness.’

(RNS) — On Thursday (Sept. 30), amid intense debate in Congress about the budget reconciliation bill, Politico magazine published a copy of an agreement signed in late July by Senate Majority Leader Chuck Schumer and West Virginia Sen. Joe Manchin, in which Manchin is guaranteed that President Biden’s Build Back Better bill would not exceed $1.5 trillion, rather than the $3.5 trillion proposed at the time.

The day before, Manchin had not once but twice made statements about negotiating “in good faith.”: “There is a better way,” he said in a Sept. 29 statement, “and I believe we can find it if we are willing to continue to negotiate in good faith.” Today’s voting rights and economic justice advocates must apply two key lessons from the courageous activists of a half-century ago.

In the face of rising voter-suppression efforts across the country, we are witnessing a growing movement that builds on the proud history of the 1960s civil rights era. To be successful, today’s voting rights and economic justice advocates must apply two key lessons from the courageous activists of a half-century ago.

First and foremost, the voting rights movement of 2021 needs to reject the pressure to isolate voting rights from a broader moral economic agenda. The U.S. Constitution enshrines the interconnected commitments to “establish justice” and “promote the general welfare.” Resisting Evictions Amid a Pandemic

Over the past weeks, multiple crises have merged: a crisis of democracy with the most significant attack on voting rights since Reconstruction; a climate crisis with lives and livelihoods upended in the Gulf Coast and the Northeast by extreme weather events and in the West by a stunning fire season; and an economic crisis in which millions are being cut off from Pandemic Unemployment Insurance, even as August job gains proved underwhelming. There’s also a crisis taking place in state legislatures with an ongoing attack on women’s autonomy over our own bodies. The Supreme Court let a law go into effect that makes abortions nearly impossible in Texas and turns its enforcement over to vigilantes. And then, of course, there’s the looming eviction crisis that could precipitate the worst housing and homelessness disaster in American history.